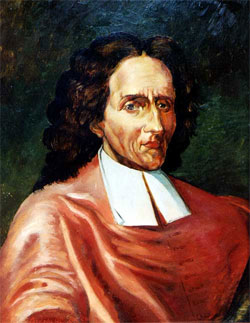 Giambattista Vico, lacquered oil painting on carton (430 x 325 mm), painted in 2002 by the Russian artist Armen Gazijants after the Vico-portrait in the Accademia Arcadia in Rome, the only one to give us a realistic impression of Vico’s appearance. This painting is a copy of a portrait made by Francesco Solimena in 1742-43 and destroyed in a fire in 1819.

The philosopher is presented in his traditional dress and wearing a dark wig. In the interpretation of the Russian artist the high forehead expresses vigour and brilliancy, the knitted brows and the big, dark eyes thoughtfulness and reflective clearness, the sharp, slightly arched nose and the distinctive chin firmness and selfassurance. In general, the figure looks refined and virile, without the melancholy that characterizes other Vico-portraits.

The portrait is in the possession of HELIKON Publishers.

Armen Gazijants was born in St. Petersburg (Leningrad) on 29 January 1945, where his father Suren Gazijants was a famous and reputable artist. He received his education at the Academy of Fine Arts in his native city and has worked in most of the great museums, art galleries, and palaces in St. Petersburg and the surrounding country (the Tsar-palaces in Peterhof, Tsarskoe Selo, Pavlovsk, Gatchina) as a painter, restorer, and imitator. One of his latest big tasks has been to lead the embellishment and decoration of the Konstantinovsky Palace, which functions as a congress centre and the official residence in St. Petersburg for President Vladimir Putin. In 2001, also for HELIKON Publishers, he painted a portrait of Niccolò Machiavelli.

The principal work of Giambattista Vico, The New Science from 1744, was published by HELIKON Publishers in 1997 in an unabridged Danish translation by Fritz Wolder – the first complete translation into a Scandinavian language. The project was carried out in collaboration with and with the financial support from the prestigious and internationally highly distinguished Italian Institute for Philosophical Studies, Naples.